2019 marks the 50th anniversary of Rock and Roll Hall of Famers ZZ Top, and they're celebrating in style with a 50th Anniversary Tour! The “Little Ol’ Band From Texas” will be performing a night of classic hits from their incredible back-catalog, including legendary tracks like "Gimme All Your Lovin'"! They'll be joined for this epic show by fellow veteran rockers Cheap Trick!

“We’re truly excited to be appearing across the continent this summer and fall, playing our bluesy kind of rock like we started in ’69. The beards, Frank [Beard]’s excepted, are perhaps a bit longer, yet nothing else has changed. We’re keeping it that way.” 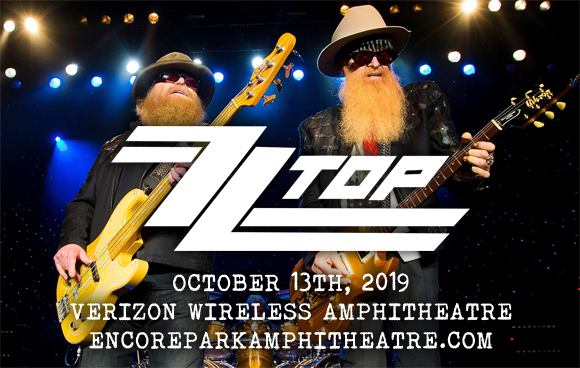 Formed in 1969 by vocalist/guitarist Billy Gibbons (the band's leader, main lyricist and musical arranger), bassist/vocalist Dusty Hill and drummer Frank Beard, ZZ Top is an American blues rock trio. The band is one of the 100 top-selling artists in the US with sales of over 25 million, and has sold over 50 million albums worldwide. ZZ Top debuted in 1971 with ZZ Top's First Album. However, it was Eliminator, their 1983 diamond-certified eighth studio album, that brought the group global recognition. To date, the band has released 11 gold, seven platinum and three multi-platinum albums. ZZ Top was inducted into the Rock and Roll Hall of Fame in 2004.