What's the fearless forecast for the concert season? It's going to be a "Grey Day" as American hip hop duo the $uicideboy$ are psyched to hit the live stage of the Ameris Bank Amphitheatre on Friday 1st October 2021. They've also stacked up an equally explosive opening and supporting line-up which includes Chief Keef, Turnstile, Night Lovell & Germ. The $uicideboy$ are due to release their latest album "Long Term Effects of Suffering" which will definitely be loaded up onto their setlist. The $uicideboy$ are reputed to have one of the fastest-growing fanbases around and showing signs of swelling demands for tickets to their live shows. No time to hesitate. Do it — click that 'Get Tickets' link now! 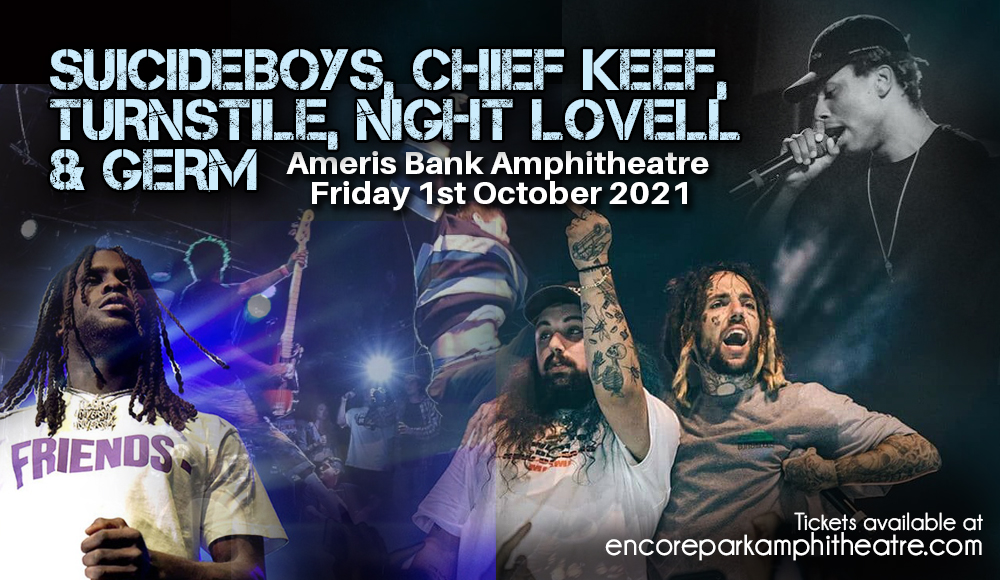 Cousins Ruby da Cherry and $crim, both from New Orleans, Louisiana, founded the $uicideboy$ in 2014. They made an utterly bizarre pact to commit suicide if fame and success still elude them by age 30. On that note alone, one can deduce that their music is not the easy-feel-good listening spectrum.

Figuratively and literally on the dark side, the $uicideboy$ will induce horrors to the core with their harsh lyrics of violence, self-harm, depression. Their album titles alone speak volumes of what to expect from the tracks – "Kill Your$elf Part I: The $uicide $aga" and "Radical $uicide", which the duo brands as "musical therapy". The commercial success of these albums reflects the cultural and societal relevance to fans whom they consider as "extended family of fellow strugglers and survivors."

The $uicideboy$ have a cult following, so to speak, yet fans are growing by the numbers. Their song "Paris" reaching over 140 million views (and counting) is their most viewed music video on YouTube ; Kill Yourself (Part III) has the highest at 290 million plays on their Spotify page; and the duo were featured in Billboard's list titled "Billboard Dance's 15 Artists to Watch in 2017".

"The Grey Tour" featuring Chief Keef, Turnstile, Night Lovell & Germ, and headlined by the $uicideboy$ is bound to hit the Ameris Bank Amphitheatre on Friday 1st October 2021. Don't miss it!