Classic rock fans, it's time for the show of the year as Styx, REO Speedwagon & Don Felder head to Verizon Wireless Amphitheatre at Encore Park on Sunday 23rd July 2017 for the United We Rock Tour! These huge names are getting together under one roof for a high-octane show, full of your favorite hits – it's gonna be legendary!!! 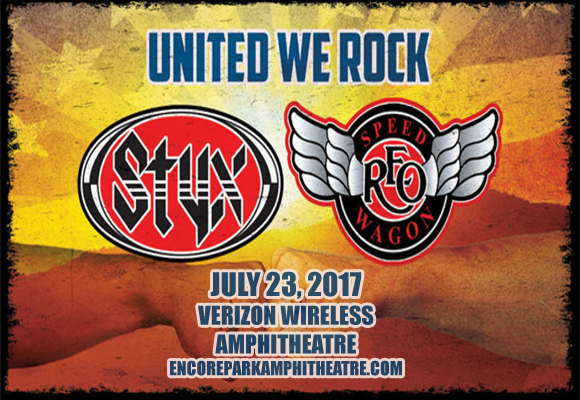 Formed in 1967 in Champaign, Illinois, American rock band REO Speedwagon signed their first record deal with Epic Records in 1971, releasing their self-titled debut album later that year. The band's popularity grew throughout the 1970s and they released several albums across the decade, including their first live album, Live: You Get What You Pay For (1977), which was certified platinum, and 1978's You Can Tune a Piano but You Can't Tuna Fish, which went double platinum. The band's 1980 album, Hi Fidelity, was a change in direction for the band musically, marking a more pop-oriented approach. The album remains the band's most successful album, selling over ten million copies and launching four US Top 40 hit singles. To date, REO Speedwagon has sold more than 40 million records and has charted thirteen Top 40 hits, including the number ones "Keep On Loving You", "Take It on the Run", and "Can't Fight This Feeling".