A must for any classic rock fans, this summer Steve Miller Band & Peter Frampton bring their smash-hit co-headlining tour to Verizon Wireless Amphitheatre at Encore Park on Tuesday 17th July 2018! With huge songs like "The Joker" and "Do You Feel Like We Do", these iconic artists have traversed the decades in the industry and continue to be popular as ever:

“Music is ethereal – it moves back and forth between the past and the future,” Miller said in a statement about the jaunt. “I’m very excited to announce that 2018 is our 50th anniversary of recording and touring together as the Steve Miller Band, and we plan to travel between the psychedelic sixties through the future with a vengeance!” 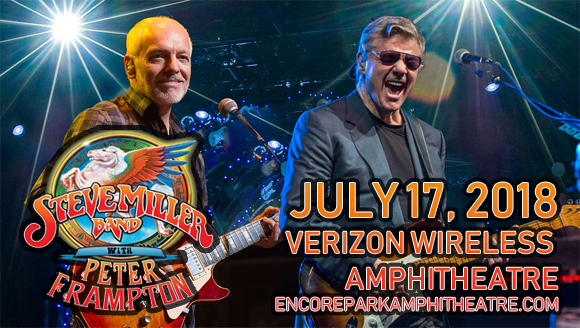 Peter Frampton is a British-American rock singer, songwriter, producer, and guitarist who began his career as a child singer in the 1960s. From child star to teen heartthrob, Frampton went on to perform as lead singer and guitarist of The Herd in 1966, before later teaming up with Steve Marriott of Small Faces to form the rock band Humble Pie. Frampton recorded four studio albums and one live album with Humble Pie, but in 1972 he turned his attention to a solo career, releasing his debut album, Winds of Change. Frampton found wider commercial success in 1976 with the release of his live album, Frampton Comes Alive!, which sold eight million copies and launched three hit singles. Frampton has had several successful solo hits to date, including "Breaking All the Rules", "Show Me the Way", "Baby, I Love Your Way", "Do You Feel Like We Do", and "I'm in You", and has released twenty solo albums.