Hair metal fans, get ready for the 80s show of your life at the Verizon Wireless Amphitheatre at Encore Park on Tuesday 5th June 2018! That’s right, it’s the massive glam rock band Poison, on tour once again with Cheap Trick! Now confirmed and on sale, tickets are available for this awesome show – don’t miss out!! Grab your tickets today and get ready to sing along to all the hits with Poison live in concert! 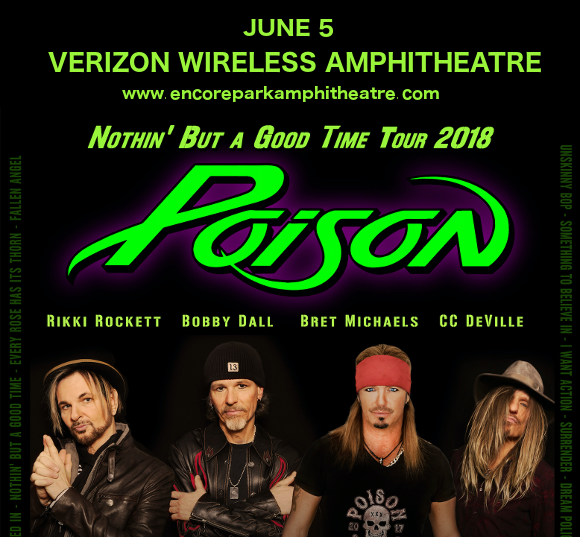 Since the mid-80s, Poison have been rocking out to an audience of millions! Gaining a huge following with their third album, “Look What The Cat Dragged In,” in 1983, their follow-up album, “Open Up and Say… Ahh!" blasted the band to superstardom. Featuring their number 1 single “Every Rose Has Its Thorn,” as well as other bit hits including “Fallen Angel” and “Nothin’ But A Good Time,” the album hit number 2 on the Billboard 200 and by 1991, had been certified Platinum no less than five times.

Are you ready for the show of a lifetime?? Get your tickets NOW!