2017 is an exciting year for country sensations Lady Antebellum! The "Need You Now" chart-toppers will be returning to the stage, refreshed from a year-long break from touring, with a new album, a new sound, but the same talent for songwriting and performance that made them stars in the first place! They'll be joined by two incredibly exciting acts: Kelsea Ballerini & Brett Young, and they're heading to Verizon Wireless Amphitheatre at Encore Park on Friday 8th September 2017! 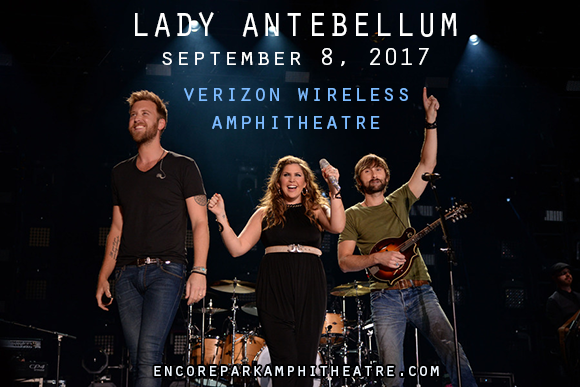 Lady Antebellum are a country band, formed in Nashville, Tennessee in 2006. Comprised of Hillary Scott (lead vocals), Charles Kelley (lead vocals) and Dave Haywood (background vocals, guitar, piano, mandolin), the group signed to Capitol Nashville in 2007, and had a hit that same year as guests on Jim Brickman’s single “Never Alone”. In the years since, the band has had a hugely successful career in their own right, with songs such as "I Run To You" "American Honey" "Looking For A Good Time" and "Hello World" racing to the top of the charts. Their 2009 single “Need You Now” was a crossover hit, finding success both in the US and abroad, and winning the group 5 Grammy Awards, including Song of the Year and Record of the Year.