Florida Georgia Line have extended their incredibly popular Dig Your Roots Tour into 2017, and they're heading to Verizon Wireless Amphitheatre at Encore Park on Saturday 21st October 2017 for the second night in a row! Not only will the FLAGA boys be performing an incredible, high energy set of their own, but they're bringing support with them in the form of Nelly & Chris Lane!!! 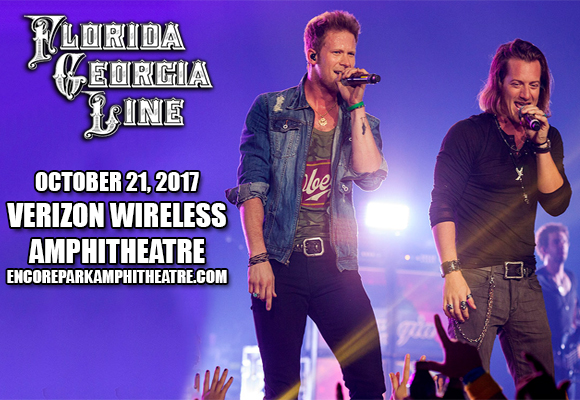 Florida Georgia Line is an American country music duo, consisting of vocalists and friends Brian Kelley and Tyler Hubbard, who met in 2008 at Belmont University. The pair's debut independent EP, Anything Like Me, was released in 2010, paving the way for a publishing/ production/ management deal with Big Loud Mountain, with whom they released their 2012 single “Cruise”. The track is officially the best-selling country digital song of all time, with sales surpassing 7 million; and spent 24 weeks at #1 on Billboard's Hot Country Songs Chart, the longest reign in the history of the chart. This success led to a deal with Republic Nashville, with whom the boys released their major label debut album, Here's to the Good Times, in December 2012. Their second album, Anything Goes, was released on October 14, 2014, and their third, Dig Your Roots, was released on August 26, 2016.