Country music's golden boy, Chris Stapleton, comes to Verizon Wireless Amphitheatre at Encore Park on Friday 19th October 2018 as part of his All-American Road Show! Stapleton, who took home three Grammy Awards at the beginning of the year, will be joined for this incredible show by country veteran Marty Stuart and rising star Brent Cobb, making one hell of a line-up! 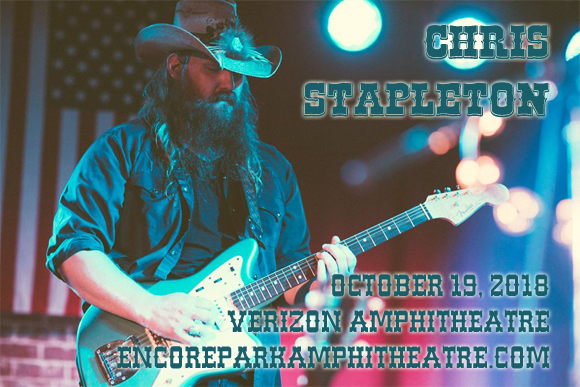 The co-writer of six number-one country songs, over 150 of American country music singer, songwriter and musician Chris Stapleton's songs have been featured on albums for other artists including Adele, Luke Bryan, Tim McGraw, Brad Paisley, Darius Rucker, Kenny Chesney, George Strait and Dierks Bentley. From 2008 – 2010, Stapleton was the frontman for progressive bluegrass band The SteelDrivers, whose 2009 song “Blue Side of the Mountain” was nominated for a Grammy Award in 2009 for Best Country Performance by a Duo or Group with Vocals. Three years after leaving the band, Stapleton embarked on a solo career, signing with Mercury Nashville and releasing his debut solo album, Traveller, two years later. Stapleton has won five Grammy Awards, five Academy of Country Music Awards, seven Country Music Association Awards and two Billboard Music Awards, among others. From A Room: Volume 2, his most recent album, was released in December 2017.