Rocking country star Brantley Gilbert parties HARD, and that's exactly what he plans to do when he brings The Devil Don't Sleep Tour to Verizon Wireless Amphitheatre at Encore Park on Saturday 8th July 2017! Joining the party will be fellow country boys Tyler Farr & Luke Combs, for a high-energy show that you'll never forget! Buckle up – it's gonna get crazy! 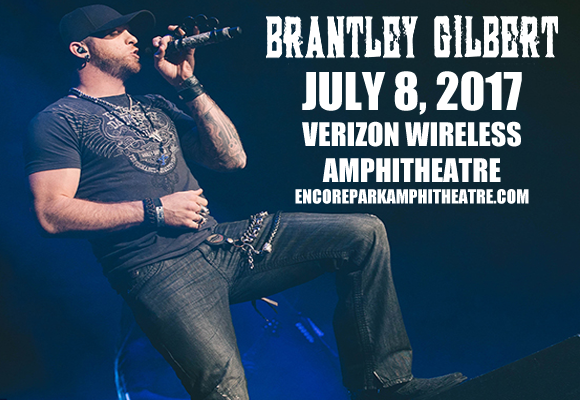 Originally, country artist Brantley Gilbert worked as a writer for other artists, including Jason Aldean (he wrote Aldean's singles “My Kinda Party” and “Dirt Road Anthem”) and Colt Ford. Gilbert was signed to Ford's independent label Average Joes Entertainment in 2009, and released his first two albums, Modern Day Prodigal Son (2009) and Halfway To Heaven (2010), with the label. In 2011, Gilbert signed a major-label deal with Big Machine's Valory Music imprint, re-releasing Halfway To Heaven with them. To date, Gilbert has released three major-label albums and eleven country chart entries, four of which have gone to number one. His most recent release, The Devil Don't Sleep, debuted at number 2 on the Billboard 200, and hit the number one spot on the Top Country Albums Chart.