Alanis Morissette comes to Verizon Wireless Amphitheatre at Encore Park on Friday 20th August 2021 in celebration of the 25th anniversary of her iconic smash hit album, Jagged Little Pill! The album, which has since inspired a Broadway musical that opened in 2019, was a definitive record of the 1990s, infuencing many artists who came after. She will also be performing tracks from her brand new album, Such Pretty Forks in the Road, and she'll be supported by fellow 1990s sensations Garbage and Liz Phair! 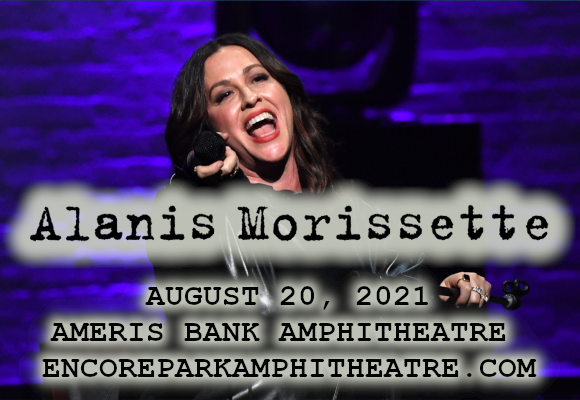 After beginning her music career in Canada in the early-1990s with two moderately successful dance-pop albums, Alanis Morissette became a world-renowned artist with her 1995 grunge-pop album Jagged Little Pill. Selling over 33 million copies worldwide, it became the second biggest-selling album of all time by a female artist, winning multiple awards, including the Grammy Awards for Best Female Rock Vocal Performance, Best Rock Song (both for "You Oughta Know"), Best Rock Album and Album of the Year at the 1996 Grammys, as well as six Juno Awards. Jagged Little Pill charted in the top 20 on the Billboard 200 albums chart for over a year and was certified diamond in the U.S., making her the youngest artist at the time to have gained diamond-certification. In Canada it was certified 12-times platinum. Morisette has sold over 75 million albums globally to date, and this year she releases her ninth studio album, Such Pretty Forks in the Road.